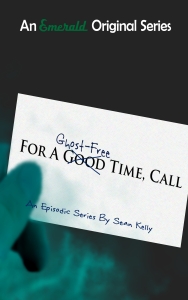 For a Ghost-Free Time, Call is an expansive supernatural adventure set in the emerald city of Eugene, Oregon which follows a young man, who–since he was a boy–has had the irritating ability to see ghosts all around him. In spite of this so-called “gift,” he found a way to cope and a few less than legitimate ways to make a little money on the side. But a con that started out as a way to make a quick buck will soon become a terrifying reality check about the world he thought he understood…

For a Ghost-Free Time, Call: Episode One

“Eugene is teeming with ghosts and for some stupid, God damn reason, I’m the only one who can see them.”

At the young age of nine, Jared developed the unnatur 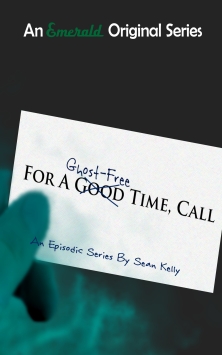 al ability to see the lingering spirits of the dead, and beyond its initial novelty, all it’s ever done is piss him off. After having to grow up rather quickly on his own, Jared took something that would have easily driven most people insane and found a way to use his unwelcome gift to his advantage. He studied and took notes from the most prevalent movies and television shows, and armed with every mainstream supernatural trope and cliché he could find, started his very own—more or less legitimate—ghost removal service. With years of hit-or-miss cons and a number of temporary solutions to combat the most crippling aspects of his “gift,” Jared finally found a way to live a “normal” life and a way to fit in with society. However, one day, while working a routine job for a rich mark, Jared will be confronted with his own lies and a glimpse of the truth behind the world around him and his abilities.

For a Ghost-Free Time, Call is available on iBooks / Nook / Kindle apps and devices! 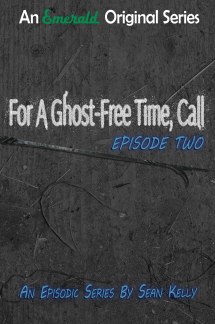 For a Ghost-Free Time, Call: Episode Two picks up the week following the mysterious events of Episode One, Jared’s life has all but returned to normal, as normal as it can possibly be when you see ghosts everywhere you go. Although he’s content to slip back into his old life, Jared is continually haunted by the strange reality he was recently confronted with and his persistent curiosity about a world he was finally starting to understand will compel him to test paranormal boundaries that some would say are better left alone. 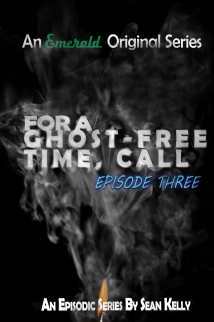 Episode Three picks up the morning immediately following the unfortunate events of the previous installment, resulting in Jared embracing a new outlook on life, in hopes of trying to put his abilities to good use and help people for real…

The following morning, Jared has been shaken by loss and doesn’t want anything to do with the ghastly forces that put him into his miserable state of self-doubt. But quickly, a cry for help breathes new life into his resolve and sets him on a path to finally do some good, real good, the kind he’d been pretending to offer gullible souls for so many years. Driven to figure out what’s causing the increase in supernatural disturbances, Jared strikes out on his own before realizing that he may need to repair a friendship that got started on the wrong foot and bring those who understand his abilities together so that he can try to be more than just a seedy, paranormal con man.